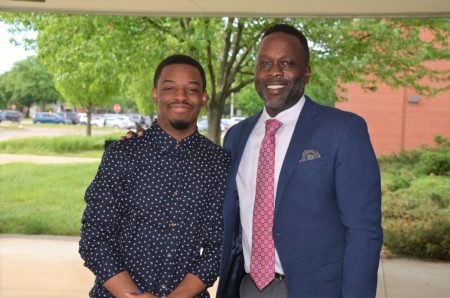 When it comes to iconic sports photos, Detroiters often recall the pic of Kirk Gibson roaring and leaping after he belted a heroic dinger in the ’84 World Series. Or maybe it’s the pic of Ben Wallace, leaving defenders six feet below as he got major air and attacked the rim in the ’04 NBA Finals. Durell Thomas, Jr., wants to be a professional sports photographer and take pics like these. With help from his mentor, Clarence Martin, Jr., president of Eypex Corporation, he has a vision, goals, and a plan to make it real.

Watch a video of Durell at our 2021 Awards Celebration.

Durell is entering his senior year at Harper Woods High School and the second year of our One-on-One mentoring program. According to Durrell, he entered the program uninterested and unmotivated about his schooling and future.

“I had a lazy mindset and wasn’t pushing myself to be what I truly want to be. I wasn’t putting my words into action.”

“Back then, I would just say what I wanted to do and achieve. But it was just words,” said Durell. “I had a lazy mindset and wasn’t pushing myself to be what I truly want to be. I wasn’t putting my words into action.”

Last year marked Clarence’s seventh year mentoring in our program. He vividly remembers the first day he met Durell. Because of COVID, all meetings were converted to online Zoom sessions.

“Durell was sitting in a dark room. I could only see his face from the light of his computer monitor. He would give two-word answers. He was too cool for school and never someone you’d think would care enough to open up, participate, and make themselves vulnerable.”

That quickly changed when Durell had a chance to meet Clarence and learn a little about him.

“When I met Clarence, I thought, I like this dude. He listens to me. He believes in me and gives me words of encouragement.”

Through our evidence-based curriculum, Clarence helped Durell explore different careers, including photography, while creating academic and career plans and goals. He introduced Durell to a friend who is a professional photographer and helped him get excited about his future.

“I told Durell that there’s no limits – you have no limits,” said Clarence. “Durell responded. He took the opportunity to grow. He started talking about things he wants to do and began thinking about his future differently. And he had perfect attendance at our sessions.”

“Clarence helped me set up a game plan. He told me what I needed to do. I set goals and put actions to my words. Boom, there ya go!”

As the new school year starts, Durell will continue working with Clarence in our One-on-One Mentoring Program, preparing for the steps he’ll take after high school in pursuit of his photography dream. His plan includes attending college and studying film and media, earning a bachelor’s degree, then shooting pictures for multiple sports outlets like ESPN, NBA, and NFL.

“I wake up every day wondering what my next move will be, thinking to myself, what can I do to put myself in position to prosper?”

“My mindset is completely different now,” said Durell. “I wake up every day wondering what my next move will be, thinking to myself, what can I do to put myself in position to prosper?”

As my interview with Clarence came to a close, he took a long, introspective pause, then said, “You know, there’s something really special about Durell. This kid is alive and excited.”

We too think Durell’s pretty special. That’s why we awarded him a 2020-21 Cupp-Hamilton Scholarship in support of his future college education. And we look forward to seeing how he will uniquely capture images of the next generation of athletes, adding to those historic pics of Gibson and Wallace for future generations to enjoy.

Workforce Prep is now a seven-year multi-channel model that engages students early in their high school experience and throughout their college years. Learn more!

Mentors make a real difference in the life of a local high school student, helping them overcome challenges to success. Learn more!