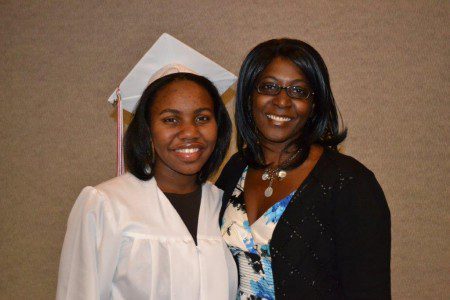 I’m now 21, no children and work and attend Wayne State University. Since Winning Futures  I have encountered some challenges that may seem more severe than others. After graduating high school in 2011 I proceeded to college as a normal high school student is expected to. I went to WCCCD for a while  and took some basic classes, then proceeded to go to the University of Detroit Mercy. I was pretty geeked about going to a private school, I got a grant for about 12k, and I had my sights set on my graduation day. Little did I know that life had different plans for me.

Shortly after my 1st semester at Detroit Mercy, the 2011 RARE Everyday Hero that I recommended, Marvin Lucas, passed away and my house caught on fire. I did go back to school at WCCCD in 2013 but I didn’t have any more scholarship, absolutely no financial aid, nothing but money coming out of my pocket. After one semester in 2013, school had to take a backseat and my family came first. At that time it seemed like I was stuck in a rut with no way out, not to mention the grant I received from the university did not go through, and I got a bill for the same amount. Trying to help my family rebuild our lives and re-establish our normalcy I got a couple of jobs that I didn’t like but did anyway to help provide for my family. Then the last job I had was in the telemarketing field. I wasn’t really feeling that because it was dishonest so I quit in June 2014. With no idea of what I’d do next my aunt called from Louisiana said my grandma needed some help because her health was failing and she needed some help with a campaign she was a candidate in, I didn’t have anything else to do so I helped her out from July up until November, and again in December. During this time I applied to AmeriCorps, I had been interviewed, accepted, and assigned to serve in Vicksburg, MS in Feb 2015. I had my sights set on that but my dad told me to apply for a job at Wayne State.

Initially I didn’t want to do it because I wanted to leave Michigan and live in the country or anywhere away from home. None the less I applied, was interviewed, went through a lengthy background investigation and clearances etc before God finally blessed me with a job and I get to go to school for free and get any degree I so choose in addition to the one I was already pursuing. I’m most proud of my determination and persistence to finish my education regardless of the odds against me. I believed that my obedience to my parents opened this door for me and I feel extremely blessed that God chose me to give this grand opportunity to.