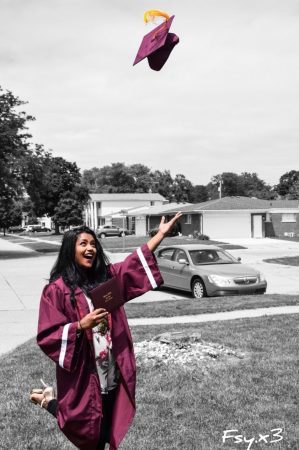 Fawjia Yeasmin, Winning Futures Class of 2018 and current freshman at the University of Michigan – Dearborn.

Do you remember what it was like preparing for life after high school? I do, and it wasn’t pretty.

For me, the realization that whatever decisions I made would effect my life forever pushed me to unhealthy levels of stress. I was 18 years- old making decisions based on how I felt in the moment. Some of those decisions were questionable, like choosing where to go for college based on the size of the school rather than if it was the best option for me. Consequently, I wasted a lot of time in college stumbling, trying to find my way, and getting back on track.

It wasn’t until I joined the team at Winning Futures and met Fawjia Yeasmin, that I realized the stress I endured as a high schooler was unnecessary. Fawjia was a senior at Warren Mott High School and student in our mentoring program. She’s is one of those people who, when you meet, you just know they’re going to be successful in whatever they pursue. The thing is though, Fawjia didn’t always feel that way.

“I was a really confused and stressed out person,” said Fawjia. “I didn’t know what I wanted to do, where I wanted to go, and I felt lost. I felt like there was no hope.”

Fortunately for Fawjia, a friend who had previously participated in our mentoring program suggested she give it a try. So, she did. And with help from her mentor, Julie Osburn, director of Wayne State University’s Research Office, Fawjia made plans for her future, outlining goals and identifying the steps she’d need to reach them. With Julie’s help and the support of her family, Fawjia created a solid plan and her stress and confusion melted away.

Today, Fawjia is a freshman at the University of Michigan – Dearborn where she is studying computer science and hopes to someday work at Google.

“Winning Futures helped me figure out what I wanted to do and set reasonable expectations,” said Fawjia. “I live at home and commute to school to save money. I’ll be starting a work-study soon, and I’m a member of the South Asian Society, student government, and dance team. All of that on top of my full course load can be a lot, but I’m able to manage it because of the time-management skills I learned from my mentor, Julie, and Winning Futures.”

Thinking about Fawjia’s experience makes me wish I had a mentor when I was in high school – someone to help me figure things out. I eventually had a great experience, but I can’t help but think how much easier it would have been, and how much more I would have gotten out of college had I participated in a program like ours.

We wouldn’t be able to transform our students’ lives without passionate volunteers who are dedicated to helping local students be more successful. Find out how you can get involved today.