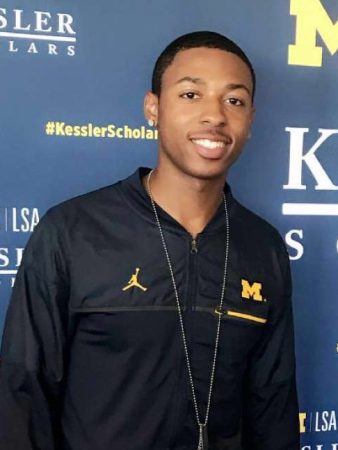 Deshawn was in the Winning Futures program his freshman year at Harper Woods High School. He excelled in the program and applied for a Cupp-Hamilton Scholarship but was not successful. Program Facilitator, Bryan Howard, encouraged him to keep focusing on his goals and not let anything stop him. Deshawn joined our program again, this time in his junior year, and focused on getting a college education. Deshawn worked with his mentor Dion Lockridge, supervisor at General Motors, to create a 5-year plan that identified the career he wanted and all the necessary steps to get there. But it wasn’t easy, especially when considering the cost. Deshawn was determined. He applied for and this time won a Cupp-Hamilton Scholarship, graduated from high school and was accepted at the University of Michigan, becoming the first in his family to attend college. Deshawn is majoring in psychology and, when not in class, he works as a supervisor for Michigan Telefund, serves on the executive board of the University of Michigan’s NAACP chapter, and is a member of Kappa Alpha Psi Fraternity, Incorporated. After earning a degree in psychology, Deshawn plans to pursue a graduate degree in public health administration.

“I am proud that I can be a role model and give back to younger people in my community,” said Deshawn. “I found a way to overcome difficulties and succeed, and I can show them that despite the obstacles, they can make it too.”